We were in Capitol Reef National Park during the lunar eclipse in May 2021. It was the end of a 3-week trip in southern Utah with our camper. Our last "adventure" was a 4.5-mile (rt) hike with 1000' elevation gain to view the lunar eclipse. We did a lot of scouting to find a place to view the lunar eclipse because all of the areas that are accessible by car in Capitol Reef are down in the valley. The only place that we found that got us high enough to see the horizon was the Fremont Gorge Overlook. (We scouted the morning before, so that meant we did the hike twice in 24 hours.) We did try finding other locations, but the Fremont Gorge Overlook was just gorgeous and the PhotoPills app indicated we would have plenty of room for any miscalculations. But what we couldn't control were the clouds and the forecast did not look promising.
We knew it would be a lot of effort for such a low chance of actually seeing the eclipse, but my husband reminded me that there was _zero_ chance of getting a shot if we didn't at least try and I remembered the last lunar eclipse that I had given up on because of clouds and was totally unprepared when it peaked through a tiny opening of clear sky for just a minute or two during totality. Soooo, we set out on the trail just after midnight under the bright light of the full moon.
And then the clouds started forming and grew more and more dense as we hiked to our chosen viewpoint. (sigh) There was one very dark cloud in particular that formed and did. not. move. the entire 6 hours we were out. Of course, the _moon_ moved and as it started to come out from behind the cloud, it created some really cool rainbow effects at the edges of the cloud. They turned out to be my favorite images of the night because by the time the lunar eclipse was near totality, the moon slipped behind a cloud bank on the horizon and disappeared completely. (Truly a "total eclipse" from our vantage point. 😜) 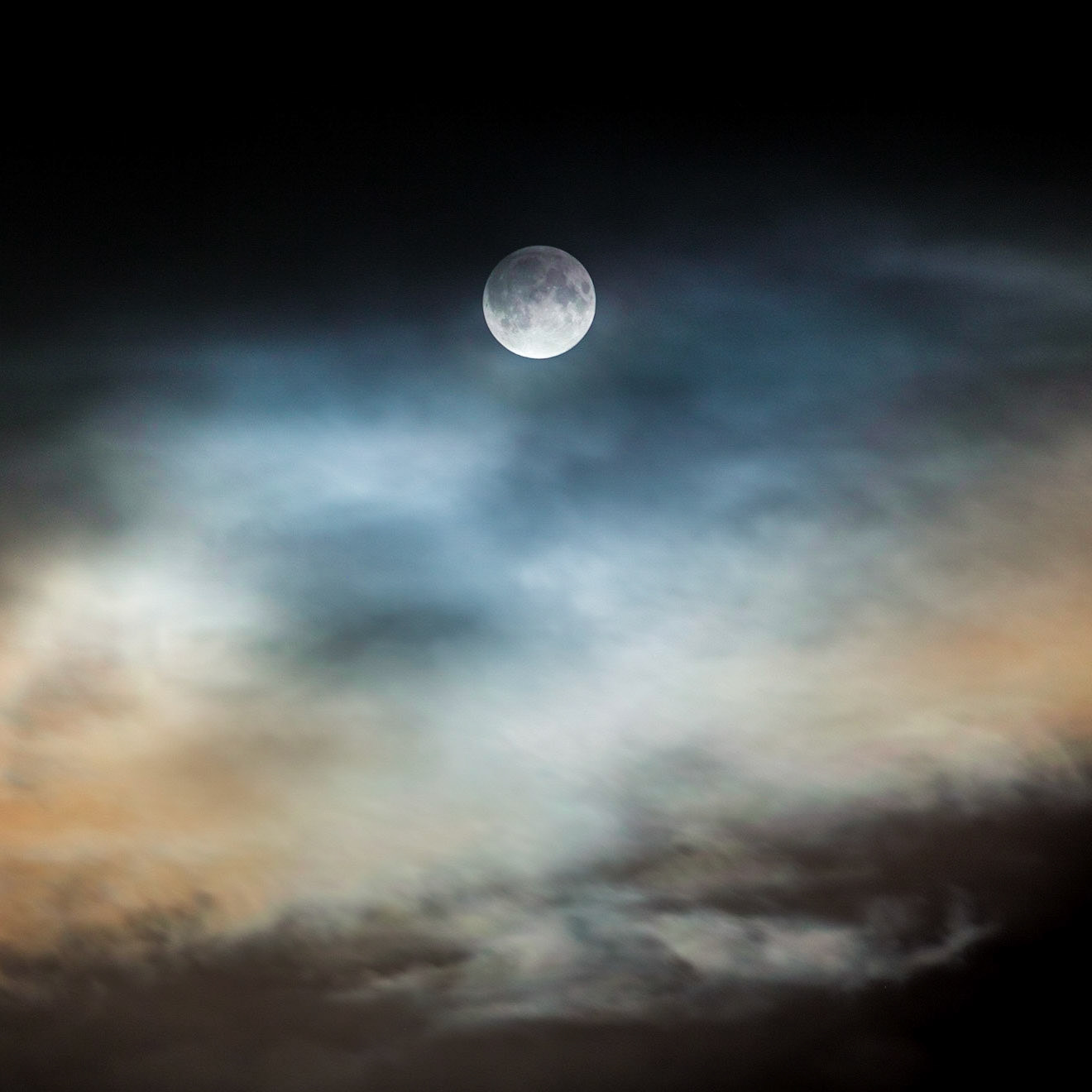 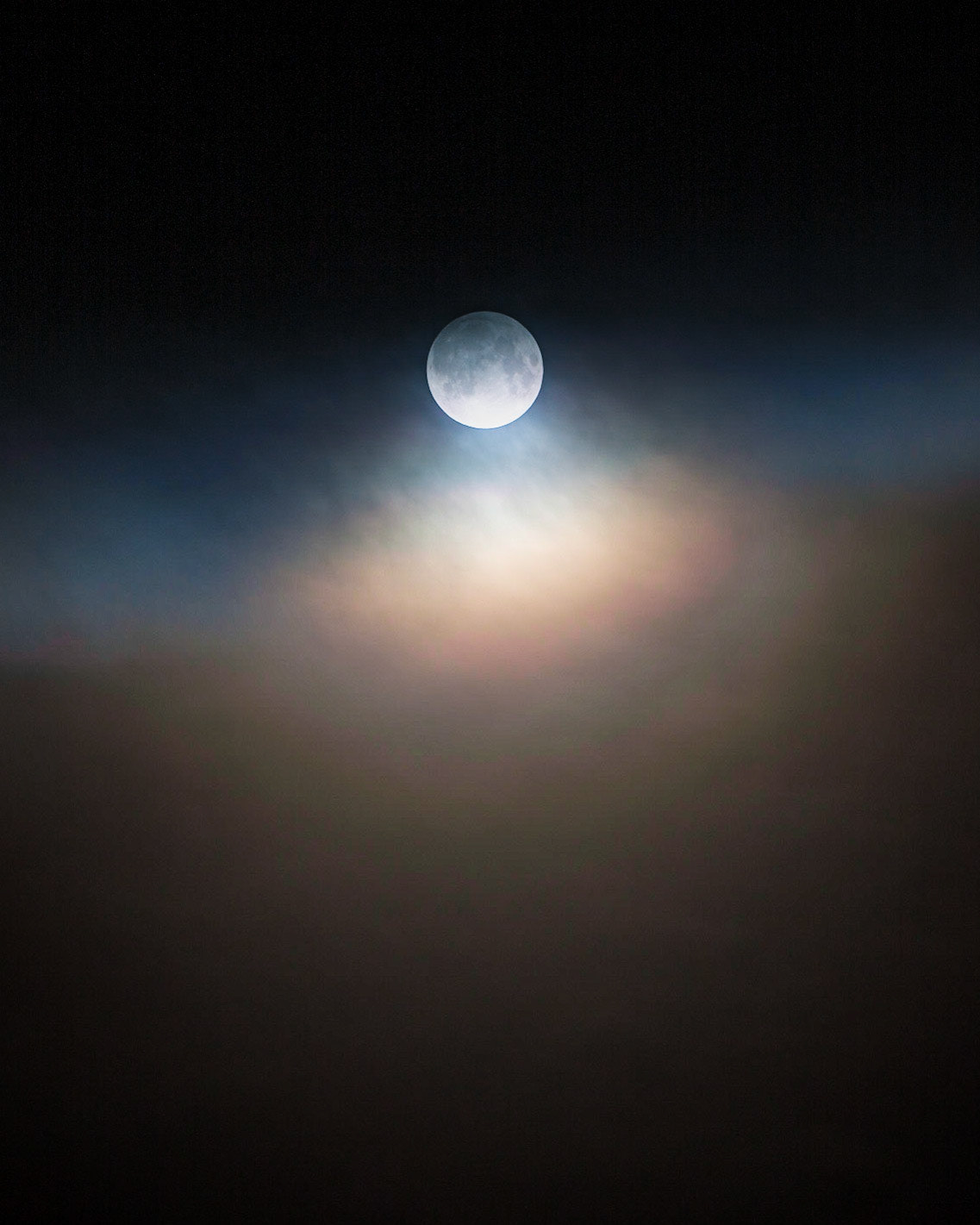 A couple of notes about the moon images above:
1. These are single-frame images, i.e. NOT blended or composite images. The moon was still behind clouds - at the very edge of the big dark cloud - and just barely visible to my eyes. But of course the camera was sensitive to the light of the moon and rendered it almost perfectly. The clouds acted like a graduated ND filter for the moon and balanced the lighting of the bright moon in relation to the rest of the scene. You can see how the moon is darker on top than the bottom - that is from the change in cloud density (not the eclipse - that hadn't started at the time I took these photos).
2. These photos were taken with my 70-200mm f/4 lens (zoomed in to 200mm). Ideally I would have used my 150-600mm lens, but I wasn't up for carrying it (and my heavier tripod head) up to the viewpoint on just a couple hours of sleep. I decided I would have to make the 70-200mm work.
Back to the topic at hand...

It turned out that the clouds acted like a huge light diffuser in terms of how the camera saw the scene and the sky was nearly pure white in most of my images of the foreground. That wasn't how our eyes saw the scene though, so I decided to try to recreate our experience by choosing a selection of photos with the necessary elements:

1. A photo of the foreground taken when the moon was mostly clear of the clouds so that it provided some definition in the canyon walls. I would have loved to have included more of the gorge in my composition, but it was quite windy when we got there and I just wasn't comfortable setting up the tripod too near the edge of the cliff. (The wind did die down eventually and that's when the biting gnats came out and had a feast on us. Sheesh. 😲)

2. A darker version of the photo with lots of detail in the clouds. (I did have to clone over the big white spot where the moon blew out the detail.)

3. Five photos of the various phases of the moon. (Yes, the final sliver that we saw is there if you look close enough.) These moon photos were taken with a 200mm lens while the foreground was taken with a 16mm lens.

To position the moon phases in the sky, I overlaid a screenshot from the PhotoPills app that I had saved during our scouting hike. While the placement of the moon's track through the sky is accurate, the phases of the eclipse are more spread out than they would have been in real life because I needed to make room for the glow of the clouds around each moon phase.

In the end, while the clouds prevented us from seeing the "blood" moon, they also make for a very unique image that I wouldn't have guessed possible when I was there taking the photos. I'm glad I kept the cameras going even when it felt pointless. (Note to self. 😊)
↑Back to Top